The weather has been too warm, it has been too cold, too much rain, bugs are bad, blue berries are ready to be picked, fishing has bee awesome,  and I can come up with more excuses at why my blog posts are not regular.

In any case, this one is about doing it right while catching and releasing large fish.

Martin and the guys (on their second trip this summer) just returned from Flindt Lake yesterday afternoon.  They caught and released many large northerns this week.  The secret to successfully photographing and releasing a large fish is very simple.

When the fish is removed from the water, quickly pose for the picture.  To reduce the time out of the water for the fish, have a camera ready and in the boat.  Dragging a fish back to camp for a simple photo will ensure the fish will not survive.

When the fish is out of the water hold him horizontal with two hands, smile and then return the fish back to the water gently.  Dropping the fish or tossing him like a hand grenade is not conducive to having the fish live to fight another day.  Holding a fish like he is your best buddy in a vertical pose it completely unnatural for the fish and his internal organs are not structured to endure that unnatural position.  Think about how a fish spend his time.  Horizontal is his natural pose.

Here is a great example of a well photographed and released fish. 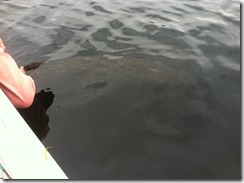 The nice thing about releasing a large fish after photographing it is twofold.  First, no one can actually take a tape measure and disprove your stories by measuring the mount on your wall, and secondly, having a photo on the wall rather than a mount is more acceptable to the boss and if you are the boss, it elicits countless accolades from underlings, even when the actual size varies with the telling of the story.