In the US it is Memorial Day weekend.  In Canada our May holiday weekend was last weekend.  It is officially called Victoria Day in Canada celebrating the Queen’s birthday, I understand, but since falls on the third weekend in May and that usually is near May 24 and there are 24 beer in a case… it is now somehow referred to as May 2-4 weekend.  Any ways, I digress.

This weekend, being Memorial Day weekend which was first recognized to memorialize the fallen in the American Civil War, brings many anglers to Canada.  Many stay home.

I on the other hand, am working hard getting camps ready for soon to arrive anglers.

With an airplane load to unload at the destination, and other staff doing other jobs, I am sometimes left to recruit new blood to help out.  Vern, a friend in Ignace, “volunteered” to assist.  Somehow our fishing rods got mixed up with the load on board.  I learned over the years, it is only right if the owner of the outposts occasionally fishes the outposts, if for no other reason than to know what he is talking about when describing fishing that most can not imagine. 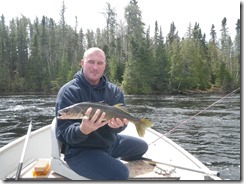 Less than 30 seconds after dropping our lines Vern reeled in a nice walleye. Many many walleye later and with a few walleye in the boat for supper, Vern had to make one more catch.   As you can see in the picture, we never left sight of the cabin.  Both these fish were returned unharmed to the lake.  Total time to test the waters; about 1 hour.

Why sit at home?  Book your Ignace Outposts trip now for a later summer date with a few walleye and northern pike.