Our life is one big adventure. There are some adventures that we can do without but when they turn out great like yesterday, we’ll take them as part of the job.

Monday morning at his regular morning check in, Joe at Seseganaga Lake had already spoken with our 11 man group at main camp and was about to head to our West Bay camp to check up on a 3 generation family of 4 staying there. When he arrived at the cabin, Joe’s “trapper sense” (similar to a “Spidey sense” but better) started to stir. Something didn’t seem right. It appeared no one had been in the cabin overnight. Joe let me know and he began what ultimately was a 6 hour boat search of all the lake’s known and best hiding spots. Our other guests pitched in and began looking too – we hated to give up our best hiding spots but given our concern…

Normally this type of situation is quickly resolved. (Yes it’s happened before.)

By mid afternoon, with no luck searching by the guys on the water, Randy (on his day off) took our Beaver and flew to Ses to begin an aerial search. Joe and some of our other guests joined him as spotters and they covered the lake more than once. They found no sign of the missing family. It was as if they had picked up the boats and moved on.

When Randy returned before dark, I called our Provincial Police. An officer attended and put some amazing wheels in motion. Early on Tues morning, less than 8 hours after the police where notified, we had 10 specially trained officers from the OPP Emergency Rescue Team in our yard. We loaded the Otter and Beaver with 8 officers since with max fuel we couldn’t take them all, and flew to Seseganaga for another search. 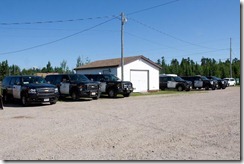 Within an hour after arriving at Ses, with the officers as spotters and two aircraft flying, a weary, hungry and cold but otherwise well preserved family were spotted sitting on a rock at the very wrong end of the lake. We will make note of this new hiding spot.

Turns out the lake really is bigger than the gas tank.

All is well as ended well. We thank the OPP for their quick and competent action. And I thank Joe and Randy for their extra effort in making sure our guests were safe. Our other guests at camp also deserve thanks for the time they put in searching. Diesel the OPP K9 searcher was probably the only one disappointed in the success of the search. This was his first official call out but he never got to fly in since his talents are best on the ground. After two nights stranded in the Canadian wilderness the found fishermen had only one request… more minnows on the Wednesday check flight… they have lots of fishing to make up for.